One of the basic assumptions in carbon-14 dating is that the sample being analyzed has undergone only radioactive decay and has remained unaltered by any other process over the years since it ceased interaction with the biosphere.

This assumption, however, is rarely true. The archaeological artifacts and geological specimens sent to labs for radiocarbon dating are usually found embedded or buried with other materials that may have affected their radiocarbon content. Any carbon-containing material that affects the carbon 14 content of any given sample is therefore a contaminant.

Important Note on Pretreatment – It is important to understand the pretreatments which are going to be applied to samples since they directly affect the final result. You are welcome to contact us to discuss the pretreatment or request that we contact you after the pretreatment (and prior to dating).

Materials such as sediments and soils typically undergo acid washes (no alkali) before radiocarbon dating.

Materials such as shells and other materials where a date on the inorganic carbon (carbonate) is to be done typically undergo acid etching before pretreatment.

Why does quality assurance matter in radiocarbon dating?
Disclaimer: This video is hosted in a third-party site and may contain advertising.

The occurrence of contamination can be natural or artificial. Natural contamination pertains to the introduction of contaminants to the sample by its surrounding material. For example, bone samples can be contaminated by the presence of limestone or organic acids in the soil (like humic or fulvic acids) where the bones were found. Another example of a natural contaminant is plant root penetration on wood, charcoal, or soil.

Artificial contamination refers to the introduction of contaminants by man during the collection, field conservation, or packaging of the samples. Labeling of bone samples with animal glue is an example of artificial contamination. Other contaminants that may be introduced during sample collection and packaging are biocides, conservation chemicals like polyvinyl acetate and polyethylene glycol, cigarette ash, and labels and wrappers that are made of paper.

Limestone is of geological origin and would be much older than any archaeological sample; hence, inclusion of limestone during the carbon 14 dating would make the sample older than its true age.

Humic and fulvic acids are naturally present in soil where microbial degradation of plants and animals has occurred. The effect of these organic acids on the sample, whether they would make the sample older or younger, depends on the age of their original organism.

When roots of plants penetrate wood, charcoal, soil, or bones, modern carbon is already introduced to them. This occurrence can make the samples seem younger than their true age.

Regardless of the carbon dating methodology employed, be it radiometric dating or the accelerator mass spectrometry (AMS) method, a process must be done before analysis to get rid of all possible contaminants. This process is called pretreatment. 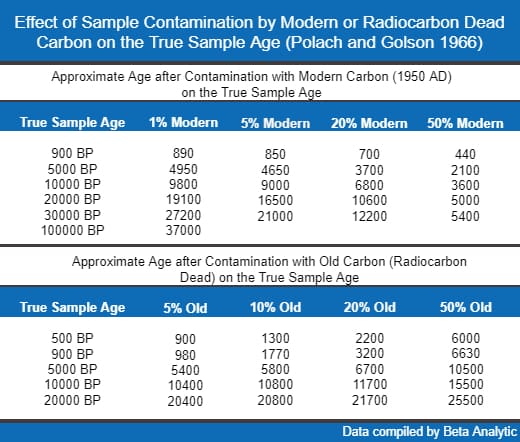 Radiocarbon Dating Samples and their Pretreatment

Radiocarbon dating labs receive various materials for analysis but not all portions of the samples can be used. It must be noted that radiocarbon dating is only applicable to materials that were once part of a living organism. Bones, shells, wood, charcoal, peat, linen, wool, and parchment are the common materials submitted for radiocarbon testing. Metal and stones cannot be directly dated unless they have organic materials embedded in them.

There is no standard method for pretreatment applicable to all samples for radiocarbon dating. The pretreatment method employed depends on the type of sample and the possible contaminants. Radiocarbon dating labs must therefore be informed of the environmental conditions and preservation techniques done to the sample before carbon-14 analysis.

There are two types of pretreatment usually applied to samples for carbon dating—physical and chemical.

The physical pretreatment of samples for radiocarbon dating is generally done by removing contaminants without the use of chemicals followed by the reduction in sample size.

Physical pretreatment usually involves the removal of rootlets that intruded on the sample using tweezers or forceps. This is a straightforward method for most samples sent to carbon dating labs except for peat samples that have been dried where the rootlets may not be easily distinguished from the rest of the sample.

Another physical pretreatment done on samples for carbon dating involves the removal of contaminants by scraping off the exterior layers using the applicable equipment. Surgical scalpels are used to scrape contaminants off charcoal while dental drills are used on large bones. A dental drill or a carborundum paper is used in the pretreatment of shell exteriors.

When the visible contaminants have already been removed, the samples for carbon dating are then reduced in size by an applicable method to increase the surface area before further pretreatment. Shells, rocks, and bone samples are pulverized using a mortar and pestle. Charcoal is often crushed in a petri dish. Wood samples are hammered, chiseled, or turned into sawdust in a mill. Radiocarbon dating personnel treat soil samples by wet sieving a slurry; only the fine particles or macrofossils are radiocarbon dated.

Chemical pretreatment is done on samples for carbon 14 dating to further remove impurities. Radiocarbon dating labs do not necessarily follow the same procedures or chemical concentrations during pretreatment because they take into account the condition of the samples during submission. Most labs, however, use the same chemicals.

There are also instances when carbon dating labs do not employ AAA method but only acid washings. This is applicable to samples with radiocarbon-rich components that are soluble in an alkali solution.

Bones are pretreated with cold HCl to extract collagen, which is the portion needed for radiocarbon dating. An alkali wash follows to ensure removal of secondary organic acids. The alkali wash is skipped when the sample is not well preserved and further washing will remove all organic substances.

For samples like shells and other calcareous materials, acid etches are done before radiocarbon dating.