The parameters used for the corrections have been obtained through precise radiocarbon dating of hundreds of samples taken from known-age tree rings of oak, sequoia, and fir up to about 13,900 BP. Beyond that, back to about 55,000 BP, correlation is made using multiple lines of evidence. This information is compiled into internationally accepted databases which are updated on occasion. The present databases are IntCal20 (northern hemisphere), SHCal20 (southern hemisphere) and Marine20 (marine environments).

It has become common practice in recent years for researchers to use a mathematical method which calibrates the Conventional Radiocarbon Age then statistically refines the “likelihood” of one calibration range over another within the 95.4 and 68.2 probabilities. These likelihoods are graphically represented by a shaded grey area on the plot and by percentage values reported next to each range. The method is called the high-probability density (HPD) range method. 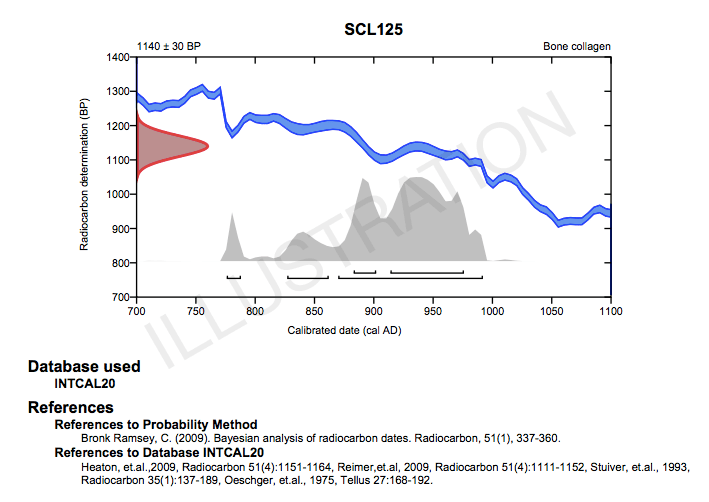 This more liberal approach to interpreting radiocarbon ages applies only to one single radiocarbon age measured. If multiple analyses are performed, statistically similar but different ages could produce different likelihoods. Despite this, the approach is considered legitimate and is accepted in peer-reviewed journals. There has been an increasing number of requests from reviewers to provide calibration in this format with the associated likelihoods specified. Beta Analytic decided to convert the calibration format to the HPD method providing stacking and averaging options upon request.

For wood and charcoal the possibility of an “old wood effect” must be considered as well as the potential inclusion of some younger material in the total sample. For carbonates, reservoir correction is theoretical, and the local variations are real, highly variable and dependent on sample origin. The age ranges generated by the program must be considered as approximations. The errors quoted on the 14C age (+/- X BP) which are then used in the calibrations are strictly limited to determinate errors (the counting errors of the sample, modern 14C standard and background). Indeterminate errors such as sample homogeneity, growth ring position (potential for old wood effects), relocation of samples (redeposition), and local reservoir effects in aquatic samples are not always quantifiable and should be considered in the interpretation of any calendar calibrated Conventional Radiocarbon Age.