The Suess Effect: Why is it important?

Since the start of the industrial revolution, carbon dioxide (CO2) has been accumulating in the atmosphere as a result of human activities (e.g. combustion of fossil fuels and land use change) – with an increase of over 100ppm CO2 in the past 60 years alone (Figure 1). These atmospheric CO2 emissions have resulted in a steady decline in stable carbon isotope ratios (13C/12C), from approximately -6.4‰ in the preindustrial era down to -8.4‰ today (Keeling et al. 2017). 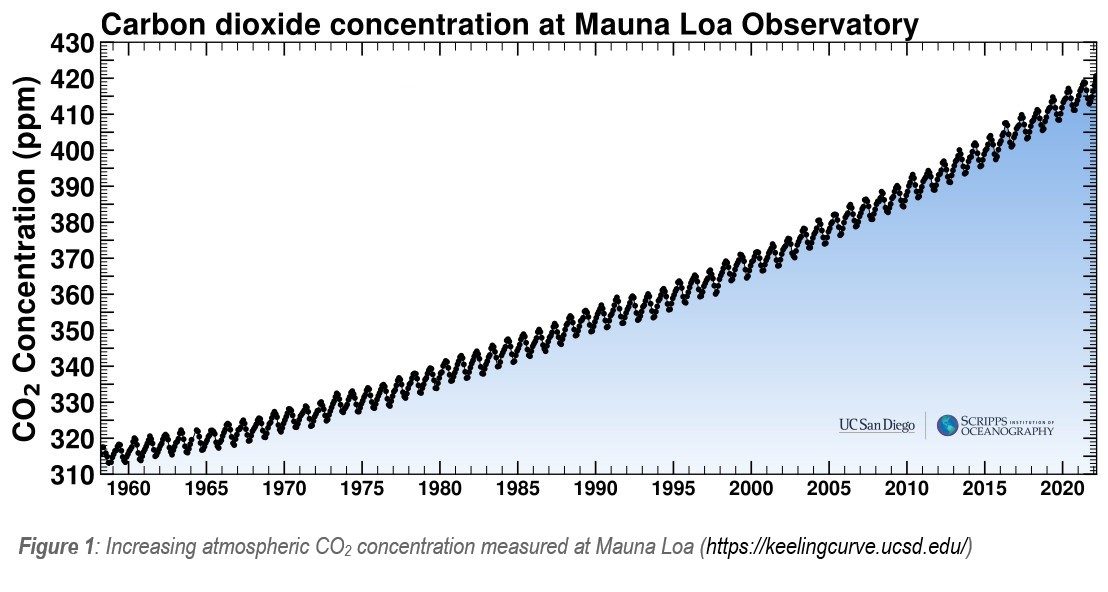 This phenomenon was first reported in 1979 by Keeling et al., and is currently referred to as the Suess Effect. It impacts both stable and radioactive carbon isotopes in the atmosphere due to the significant amount of fossil fuels being continuously emitted.

Fossil fuels are derived from fossilized plant and animal remains, buried for millions of years. These fossil plants took up carbon from the atmosphere during their lifetime, selectively utilizing light carbon (12C) over heavy carbon (13C), resulting in a 13C depleted δ13C signature; animals who ate these plants have a similar discrimination. As a result, the biosphere has significantly less 13C compared to the atmosphere at any given time.

When fossil fuels are burned and emitted to the atmosphere, it results in an influx of 13C-depleted CO2, producing the stark δ13C depletion demonstrated by Keeling et al. Due to this known effect, any carbon isotopes analyzed during the last 150 years in environmental and archaeological studies must be corrected to account for the artificial 13C-decline (Figure 2). 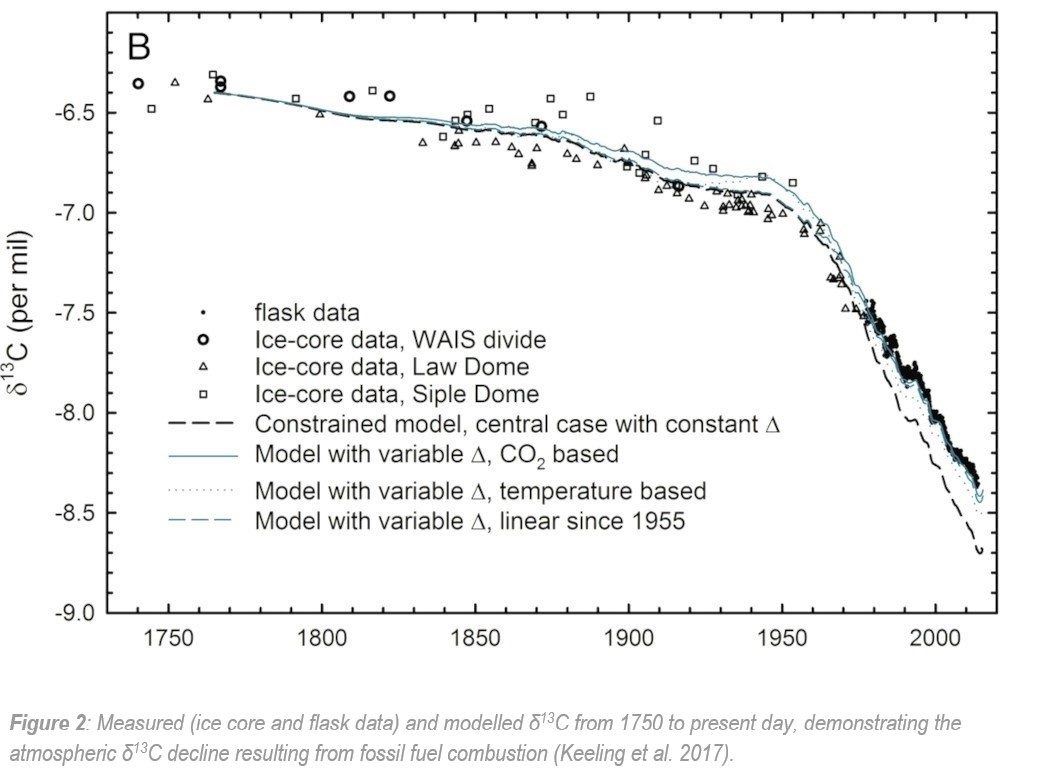 In addition to impacting stable carbon isotopes, the fossil fuel burning also impacts radioactive carbon (14C). When the aforementioned fossil organisms took up 13C and 12C, they were also integrating radioactive 14C into their structures. After organism death, this 14C decreases at a predictable rate until the fossil is no longer radioactive (approximately 40,000 – 50,000 years). When these low-14C organisms are converted into fossil fuels and then burned, a dilution of 14C in the atmosphere occurs – known as an “aging of the atmosphere” (Graven, 2015).

This atmospheric aging of slowly declining 14C was interrupted in the 1950s-1960s due to the testing of nuclear weapons producing a 14C peak. Since, the atmospheric 14C has continued to steadily decline due to continued CO2 emissions. If emissions are halted (RCP2.6 scenario), the 14C could continue at a preindustrial level (Figure 3). However, if emissions continue at the observed rate, the 14C will continue to decline at a rapid rate. 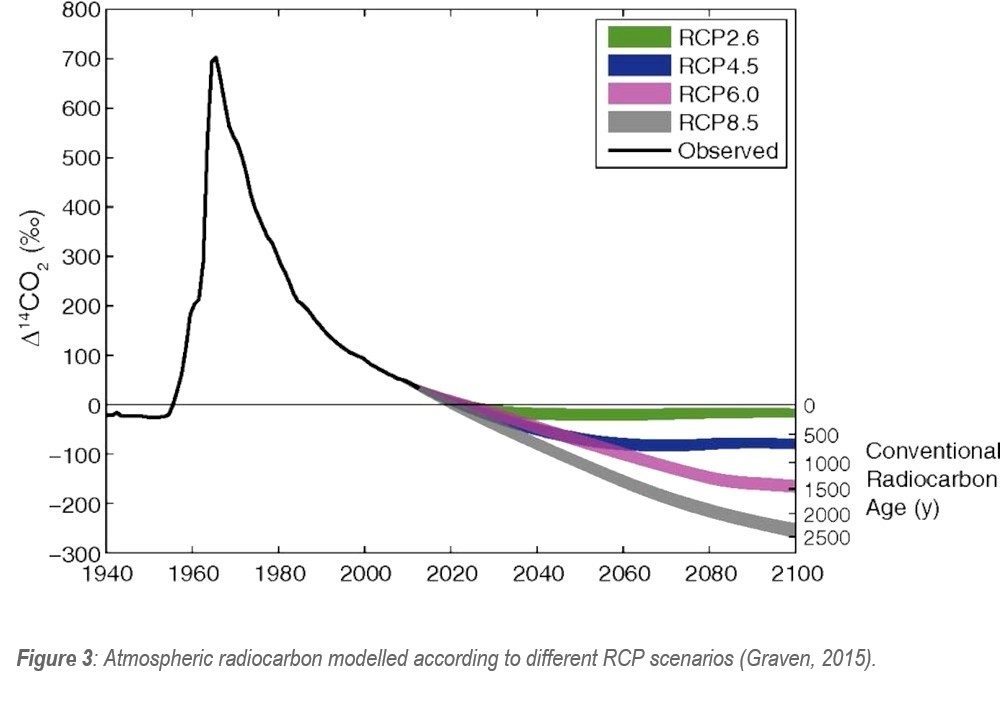 The artificial aging of the atmosphere has widespread implications for radiocarbon dating as the atmospheric 14C content in 2100 could resemble a 2000-year old atmosphere, meaning samples from 2100 could be erroneously dated to AD 100 (Graven, 2015). As a result, unless supplementary lines of evidence could be presented to rule out different date ranges, a researcher may be left with multiple possible ambiguous date range results.

At Beta, your samples will be calibrated to take the Suess Effect into account. Contact us today if you have any questions about how this phenomenon could impact your results.

Read more about how human activities have affected the radiocarbon calibration curve through Bomb Carbon.

Graven, H.D., (2015). Impact of fossil fuel emissions on atmospheric radiocarbon and various applications of radiocarbon over this century. Proceedings of the National Academy of Sciences, 112(31), pp.9542-9545. 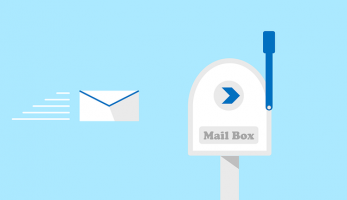 Subscribe to our newsletter to receive webinar and industry updates.

This entry was posted on Tuesday, March 8th, 2022 and is filed under Radiocarbon Dating, Stable Isotope Analysis .