What is Isotopic Fractionation?

Isotopic fractionation of stable carbon isotopes Carbon-13 (13C) and Carbon-12 (12C) involves alterations in the ratios of isotopic species as a function of their atomic mass as a result of natural biochemical processes. 1 Variations as such are unrelated to time and natural radioactive decay. It is common practice in Carbon-14 laboratories to correct radiocarbon activities for sample fractionation. The resultant ages are termed “normalized”, meaning the measured activity is modified with respect to -25 o/oo (per mille) with respect to VPBD. The correction factor must be added or subtracted from the conventional radiocarbon age.

In order to provide radiocarbon determinations that are both accurate and precise, it is necessary to correct for “isotopic fractionation” using the stable isotopes 13C and 12C. This correction factors out error introduced from metabolic and respiratory pathway differences between the modern reference standard material and the sample material. The unit of measure is termed “δ13C”.

Two δ13C values are measured at Beta Analytic:
– One is the value applicable to correct for total fractionation (natural, chemistry and AMS).
This value is not reported but it is used to produce the correct “Conventional Radiocarbon Age”. Important: Reporting conventions using “Conventional Radiocarbon Age” terminology indicate the result has been corrected for isotopic fractionation.

– Beta also measures a second δ13C value in an isotope ratio mass spectrometer (IRMS δ13C).
This value is representative of the sample itself and is reported. This is the value the literature expects.

In comparison, reporting the “AMS δ13C” is misleading and open to misinterpretation. Radiocarbon users should always be aware whether the δ13C they are using in their research is the IRMS δ13C or the AMS δ13C. If it is the AMS δ13C, it cannot be used for dietary or metabolic pathway studies. Reported δ13C values from Beta are always the values measured in the IRMS.

Occurrence and Measurement of Isotopic Fractionation 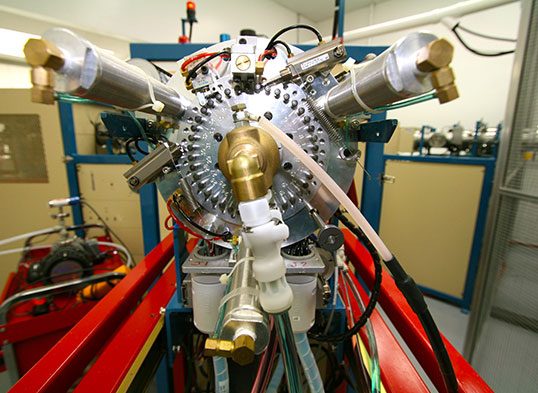 Fractionation during the geochemical transfer of carbon in nature produces variation in the equilibrium distribution of the isotopes of carbon (12C, 13C and 14C). Craig (1953) first identified that certain biochemical processes alter the equilibrium between the carbon isotopes. Some processes, such as photosynthesis for instance, favors one isotope over another, so after photosynthesis, the isotope C13 is depleted by 1.8% in comparison to its natural ratios in the atmosphere (Harkness, 1979). Conversely the inorganic carbon dissolved in the oceans is generally 0.7% enriched in 13C relative to atmospheric carbon dioxide.

The extent of isotopic fractionation on the 14C/12C ratio (which must be measured accurately) is approximately double that for the measured 13C/12C ratio. If isotopic fractionation occurs in natural processes, a correction can be made by measuring the ratio of the isotope 13C to the isotope 12C in the sample being dated. The ratio is measured using an ordinary mass spectrometer. The isotopic composition of the sample being measured is expressed as δ13C which represents the parts per thousand difference (per mille) between the sample’s carbon 13 content and the content of the international PDB standard carbonate (Keith et al., 1964; Aitken, 1990). A δ13C value, then, represents the per mille (part per thousand) deviation from the PDB standard. PDB refers to the Cretaceous belemnite formation at Peedee in South Carolina, USA. This nomenclature has recently been changed to VPDB (Coplen, 1994).

The δ13C value for a sample can yield important information regarding the environment from which the sample comes or the mixtures of materials used to produce it because the isotope value of the sample reflects the isotopic composition of the immediate environment. In the case of shellfish, for example, marine shells typically possess a δ13C value between -1 and +4 o/oo (per mille), whereas river shells possess a value of between -8 and -12 o/oo (per mille). Thus, in a case where the precise environment of the shell is not known, it is possible to determine the most likely environment by analysis of the δ13C result.

Fractionation also describes variations in the isotopic ratios of carbon brought about by non-natural causes. For example, samples may be fractionated in the laboratory through a variety of means; incomplete conversion of the sample from one stage to another or from one part of the laboratory to another. In Liquid Scintillation Counting, for example, incomplete synthesis of acetylene during lithium carbide preparation may result in a low yield and concurrent fractionation. Similarly, the transfer of gases in a vacuum system may involve fractionation error if the sample gas is not allowed to equilibrate throughout the total volume. Atoms of larger or smaller mass may be favored in such a situation. If, however, the entire sample is converted completely from one form to another (e.g. solid to gas, acetylene to benzene) then no laboratory-induced fractionation will occur.

Where -8033 represents the mean lifetime of 14C (Stuiver and Polach, 1977). Aon is the activity in counts per minute of the modern standard, Asn is the equivalent cpm for the sample. ‘ln’ represents the natural logarithm.