In 1940, radioactive carbon (14C) was discovered through its artificial creation at the Radiation Laboratory in the University of California Berkeley by Samuel Ruben and Martin Kamen. Through further research, it was discovered that the half-life of 14C was approximately 5,700 years and that it was created naturally in the atmosphere through the interaction of cosmic rays with atmospheric nitrogen.

Understanding the importance of 14C in the environment

A few years after the discovery of 14C, Willard Libby (a Professor of Chemistry at the University of Chicago) connected the production of atmospheric 14C with plants. He hypothesized that plants absorbed 14C alongside non-radioactive carbon during photosynthesis.

Based on this connection between the life of the plant and 14C uptake, he further theorized that the plant would stop taking up 14C after death, and the 14C within the plant structure would decay at the known rate without replacement. Thus, Libby discovered the basis of radiocarbon dating – that it’s possible to calculate the time since death of a plant (or plant-based artifacts like paper, textiles, wood) by measuring the level of 14C. This extraordinary discovery earned Libby a Nobel Prize. 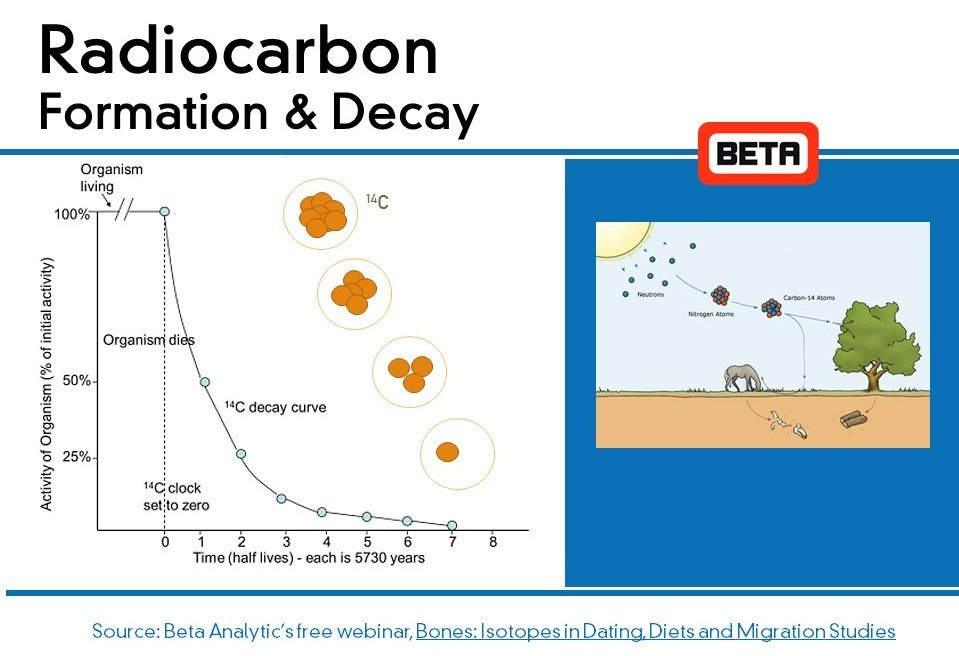 Following the discovery of 14C and its dating potential, the search was on to identify a practical and efficient method of measuring 14C in samples. Initial measurements were completed using thermal diffusion enrichment (Anderson et al. 1947; see the apparatus here, Currie, 2004). At the time it was extremely costly, required significant amounts of samples and was not particularly accurate due to background radiation. Through some modifications – including cosmic ray guards and sample conversion to solid carbon – this method was improved.

Once 14C could be more reliably measured, Libby and colleagues measured the 14C concentration in living matter (e.g. the “zero point” / modern value) at various geographic locations (Anderson, 1951) as well as 14C of samples (tree-rings) and historic objects (contextually-dated Egyptian artifacts) with known ages. The comparison between the historical objects and the “modern” value at the time was used as a basis to develop the first radiocarbon calibration curve named the “curve of knowns” (Libby, 1967).

To account for potential differences between different machines and laboratories since each would have their own standard, a set of international standards were developed. The NBS Standard Reference Material (SRM) was defined as “modern” carbon, referencing the year 1950 AD. Hence, today all material measured using radiocarbon dating is expressed as “years before present”, equivalent to years before 1950. Following this series of discoveries by Libby and his colleagues, radiocarbon dating laboratories were established around the world, resulting in rapid advances in curve development and calibration.

Expansion of the radiocarbon calibration curve

Throughout the coming decades, scientists around the world focused on developing the radiocarbon calibration curve deeper in time at many different geographical locations. Many of the advances were thanks to the expansion of dendrochronology – the science of measuring and dating tree-rings. For example, at a radiocarbon symposium in 1970, a new curve was presented from Bristlecone Pine – an old living tree that can grow for more than 4,000 years. The curve covered a vast period from approximately 1600 AD to 5500 BC. 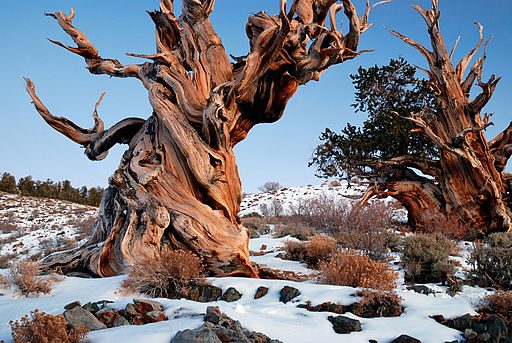 Following nuclear weapons testing in the 1950s-1960s, the science of radiocarbon dating permanently shifted as there was a doubling of 14C in the atmosphere known as the “bomb pulse”. This pulse of 14C was found in biological material across the globe, creating an international signature in the radiocarbon curve. Significant research continuing to today has focused on measuring the precise bomb peak curve as a means to measure samples living on either side of the peak.

One of the most significant developments in 14C dating was the establishment of counting individual 14C atoms (Accelerator Mass Spectrometry Dating) rather than the 14C decays (Radiometric Dating), the former allowing one to measure at far higher precision (+104) with far smaller amounts (< mg) of sample (Currie, 2004). Radiometric dating methods detect beta particles from the decay of carbon-14 atoms while accelerator mass spectrometers count the number of carbon-14 atoms present in the sample.

Mass spectrometers detect atoms of specific elements according to their atomic weights. They, however, do not have the sensitivity to distinguish atomic isobars (atoms of different elements that have the same atomic weight, such as in the case of carbon-14 and nitrogen-14 — the most common isotope of nitrogen). Thanks to nuclear physics, mass spectrometers have been fine-tuned to separate a rare isotope from an abundant neighboring mass, and accelerator mass spectrometry was born.

Today, AMS dating only requires between 20-500 mg of sample permitting the measurement of very small samples including blood particles, grains and seeds, takes only a few hours to complete (compared to 1-2 days for radiometric dating), and is able to achieve higher precision and lower background levels compared to radiometric dating.

Currie, L.A., 2004. The remarkable metrological history of radiocarbon dating [II]. Journal of Research of the National Institute of Standards and Technology, 109(2), p.185. 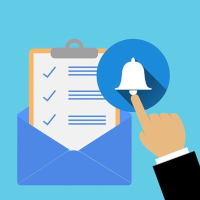 Do you need Carbon-14 dating or U-Th dating for bones?

This entry was posted on Wednesday, June 15th, 2022 and is filed under Radiocarbon Dating .