Why are Pteropods Excellent Recorders of Climate Change

Pteropods are sea slugs of <1cm in size, which originated approximately 133 million years ago in the Early Cretaceous. Currently, they can be found in most major oceans across all latitudes, and tend to be confined to the open water column within 10 meters of the ocean surface. They feed on plankton and zooplankton; thus they tend to be particularly abundant in nutrient-rich zones such as upwelling zones and continental shelves. 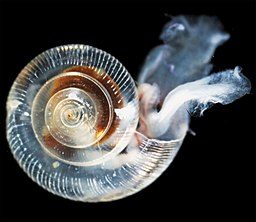 Pteropods are commonly analyzed in modern climate as well as paleoclimate studies due to both their abundance within the water column as well as their vulnerability to changing environmental conditions, particularly CO2 driven climate change.

In periods of enhanced atmospheric CO2 (such as the modern Anthropocene), the oceans absorb approximately 30% of this CO2, resulting in a sequence of chemical reactions. These reactions lower the water’s pH making it more acidic, while decreasing the availability of carbonate ions used to develop skeletons for calcium carbonate-bearing marine organisms, including pteropods. Without enough CaCO3, such organisms develop fragile shells ultimately leading to dissolution.

For example, a recent study by Gardner et al. (2017) found that polar pteropods from the Southern Ocean have already demonstrated high larval mortality and extensive shell malformation. Pteropods are expected to be extremely vulnerable to continued fossil fuel emissions, with another study confirming that a complete dissolution of pteropod shells will happen within 45 days at CO2 levels expected in 2100 (NOAA).

Beyond modern implications, pteropods have also been utilized in numerous paleoclimatic studies based on the fact that their distribution is highly dependent on temperature and productivity, while their structural integrity can signal CO2 variability.

For example, pteropods have been used to reconstruct and/or contextualize past climate change events such as the Paleocene-Eocene Thermal Maximum (PETM), known as the closest analogue to today’s ocean acidification. Through the analysis of fossil evidence from 21 pteropod species, Peijnenburg et al. (2020) found that all pteropod clades survived the PETM and diverged soon thereafter, demonstrating that while they are known to be vulnerable to ocean acidification, they have been resilient in similar past conditions.

Please email the lab using this contact form or call (+1) 305-667-5167 to request an estimate or quotation for your research. We respond to inquiries promptly during business hours (8 AM – 5 PM EST, Monday-Friday).

This entry was posted on Monday, August 22nd, 2022 and is filed under Radiocarbon Dating, Stable Isotope Analysis .