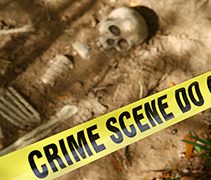 Forensic experts use radiocarbon dating to establish if an individual died recently (perhaps a matter for the Justice Department) or in antiquity (a matter for the archaeologist). They do this by using the “bomb carbon” curve.

AD 1963 marked the signing of the Partial Test Ban Treaty (PTBT) by the United States, United Kingdom, and the Soviet Union wherein it was agreed that nuclear weapons testing would no longer be performed above ground surface. Since then, the global radiocarbon level of the atmosphere has decreased through uptake in the oceans and biological systems – e.g. the 1970s had higher radiocarbon levels in the air than the 1990s, and therefore so did individuals who were deceased during those times.

What Radiocarbon Dating Can Routinely Do

– identify if an individual was living post thermo-nuclear weapons testing

What Radiocarbon Dating Cannot Routinely Do

– tell the age of an individual

– identify the year of death of the individual

NOTE: Publications are cited in literature indicating radiocarbon can be used to determine the approximate age of an individual by comparing teeth to bones. Additionally, using the radiocarbon signature within trabecular bone vs cortical bone has been cited as a means of identifying which side of the bomb curve the individual lived (prior to 1963 or post 1963).